Apraxia Defined by Not Defined By

These were some of the few sounds Jaxon made at almost 2 ½ years old. Based on typical child development, at two years old he should have been able to say at minimum 50 words while also combining some of those words into two-word phrases.
Not only was verbal communication extremely difficult for him but he relied on pointing, gesturing, grunting and taking his parents to what he wanted to communicate his wants and needs.

Jaxon was displaying characteristics of Childhood Apraxia of Speech (CAS) – a disconnect between the brain and the formulation of speech. Technically speaking, it means a child cannot accurately motor plan out his speech patterns.

Some signs to look for according to Mayo Clinic include:

Understandably, children and their parents can get overwhelmed and frustrated. Please know there is help. A trained Speech-Language Pathologist will be able to determine if your child has CAS or another speech disorder and can help lead you in the right direction for support.

Therapy for a child with CAS is much like a dancer learning to perform a new routine. It requires learning the individual moves, stringing them together and then time and patience to rehearse and master.

Jaxon started his therapy journey learning to imitate vowels and consonants in isolation. After beginning to improve with this skill, Jaxon then began working to combine some of these consonants and vowels together to make words. With engaging therapy and consistent practice, Jaxon made steady progress and began to master the skills that come so natural to other children his age. 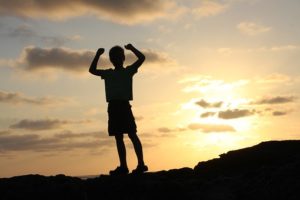 Now a year later, Jaxon’s vocabulary is exploding. He is gaining new words everyday and has a vocabulary of well over 300 words and is putting 2-3 words together in short phrases. Although Jaxon’s progress started slow, he has made significant gains. He continues to work to reach his speech and language developmental milestones.

Children like Jaxon may have to work a little harder to communicate and there may be extra challenges along the way–but their perseverance and resilience is a great teacher for us all.

What started as a boy who could only mutter a few unintelligible sounds is now a boy who is belting out songs at school. There is always hope and you can find it here. Please call or email us if you have any questions regarding CAS.