A Touching Story of Generosity 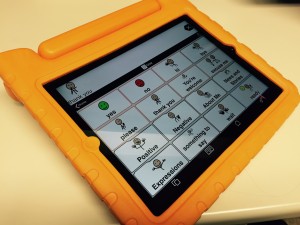 This last December, we were approached by a Marian Hope family who wanted to “give back.”  They felt that they had been so blessed over the last year and wanted to share with another family whose child was struggling to communicate.  They generously donated funds to purchase an iPad and communication app (Proloquo2Go) for a child with apraxia of speech.  They shared their story with us:

Our son E. has been receiving speech therapy at Marian Hope for about two years. He was a typically developing child up until he was about a year old, then we realized he was “losing” words and was no longer gaining any new words. We consulted his pediatrician and we were told it was probably normal and that some kids don’t talk until they are older. Other people told us it was because he is the baby of the family and his siblings spoke for him, or that he was just stubborn.
We found out shortly after E. turned 2 that it was not normal that he was losing words, and that he was not just stubborn. We discovered E. had something called apraxia of speech. In short, this means that the connections between his brain and his mouth kind of short circuit, or get jumbled. So, E. knew what he wanted to say but his brain was unable to communicate it to his mouth so that he could tell us.
The staff at Marian Hope got E. started right away with the therapy he needed, and in the last two years he has made more gains than we had ever thought possible. He went from having 3 words to being able to speak in full sentences. In addition, we have seen his sweet personality and wonderful sense of humor emerge.
While E. still has some hallmarks of apraxia, we celebrate every gain he makes and we are very thankful for the services he has received through Marian Hope.
Not every child with apraxia has it as easy as E. Some children require the use of technology, such as an iPad, to help them communicate. The problem is that iPads are expensive, especially for a family raising a child with special needs. That’s why my family decided to create an iPad fund through Marian Hope.
I know what it’s like to be that mama whose child is crying out of frustration because he can’t ask for what he wants, and my heart breaks for other parents going through the same thing.
So, this Christmas, we asked family and friends to consider buying less for our children, and to donate to the iPad fund so that we could give a child a “voice” for Christmas. Within a short period of time, one iPad was fully funded!
It is our hope to continue funding the iPad program as long as we possibly can, and that others would consider contributing as well. As Marian Hope grows and provides services to more children, the need for more iPads will surely grow as well.
We are so thankful to have Marian Hope and we are blessed to be able to help give something in return for all they have done for us, and for E.!

Obviously, we were so touched by this family’s comments and generosity.  We easily found a child who would benefit from their donation.  It was wonderful to see the tearful look of gratitude in their eyes when we told his parents the exciting news.  We hope that this donation will improve their lives and will help their son to make even more progress in therapy.  We asked them to share a little of their story as well:

Before we went to Marian Hope Center it felt as if we were losing our son. He would stare off in a daze, had poor eye contact, wasn’t talking, would often seek to be alone, wouldn’t let most people touch him and was always pretty irritated. After taking him to MHC we immediately saw improvement. We met with their nutritionist who gave us invaluable information about a gluten free/casein free diet and supplements. After changing his diet we immediately saw improvement in all areas he had previously struggled in. Once he started therapy at MHC he went from not talking to saying, “Ready, set, go!”, “down”, “all done” and has mimicked other words his therapists have said on numerous occasions. He went from a child who would not tolerate touch to a child that now reaches out for his therapist’s hand to guide him. This happened after only 2 months of therapy and changing his diet! We are beyond grateful for The Marian Hope Center and the amazing people who work there!

We are so grateful to be blessed with such amazing families at Marian Hope!  We have collected several inspirational stories over the years that you can read here and here.  To contribute to fund a communication device or therapy services for a child in need, please visit our Donation page or email Heather Ruoff.
On January 14, 2015   /   Inspirational Stories, Technology   /   Leave a comment