Children don’t come with manuals.  Parents read books and listen to podcasts and follow blogs and try to keep their head above the child-rearing water.  And all the while the little people are absorbing the world around them which can be absolutely frightening but can also be so incredibly beautiful. 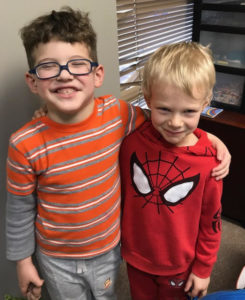 My son has been a peer model in a couple preschool classes at Marian Hope the last couple years.  Over these two years he has learned alongside a child who was non-verbal, a child who wore cochlear implants, a child in a wheelchair, a child who wore glasses and meanwhile he was the child that always came to school in pajamas.

And although he attends class far less than my other kids did at his age, he is academically right on the mark and in some ways, he’s above the mark.  The biggest surprise though has been his expression or lack of expression regarding the diversity of learners in his class.  He is essentially un-phased by the differences.  To him, his classmates are his friends.  They are the kids he wants to invite to his birthday party.

This, I thought, was pretty normal since a child’s friend / birthday list is typically limited to the circle of children they come in most contact with and maybe their siblings…maybe.  But just recently I saw how inclusion works in the real world.

A few weeks ago, I took my son grocery shopping with me.  As we were waiting at the deli counter, a little girl in a wheelchair came toward us with her mom and dad.  My son looked at her and said very matter-of-factly… “Wheelchair. Cool.”  The beauty that is inclusion smacked me right in the be still my heart.  I’m not sure she heard him but I hope she did because I know the other more common comments spoken – “what’s wrong with her?” “why does she have that chair?” “what happened to her?”

No one told my youngest son that different is cool.  He’s living it.

Witnessing this assures me that children are indeed sponges.  As parents we make decisions and I believe how we frame their world matters.  The experience of inclusion has created a life defining foundation for my son.   So whether or not inclusion changes the world, I can’t say.  But I know this for sure… its changing his world.